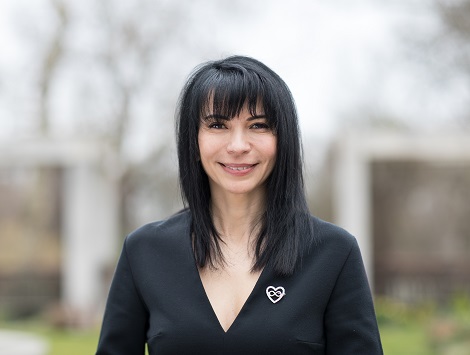 “I’m passionate about connecting and enabling people to create meaningful value, under our strong purpose of transforming women’s lives through beauty.”

Angela Cretu is responsible for the business outside of Latin America and for oversight of our brand globally.

Prior to her appointment as CEO in January 2020, Angela was General Manager of Avon Central Europe, where she led a mix of 19 mature and emerging countries. She was responsible for growing our market share in Central Europe through a competitive Representative, customer and employee value proposition, while retaining the highest profitability.

Angela joined us over 20 years ago, following several sales roles in FMCG industry, and built up a strong career from Sales Manager and Country Lead, to Vice President of Global Business Model Innovation. Angela has also held positions as General Manager across Eastern Europe, Turkey, Middle East and Africa and Central Europe.
Angela graduated from The Academy of Economic Studies, Economic Cybernetics, Statistics and Informatics in Bucharest. She also completed an executive education programme at the London Business School.

In 2021 Angela was recognised as a Leader for Change in the Women's Empowerment category by INNOCOS and commended by Management Today as CEO of the Year. She also won the CEO of the Year award at the 2021 SABER EMEA Awards, recognising superior achievements in brand, engagement and reputation.

Angela recently joined Kiran Rasoda, of The Barton Partnership, on her podcast ‘Women in Leadership’. In the episode, she shares her career story, rising to the position of CEO at Avon and promoting inclusivity, humility and a purpose-led business model to improve the wellbeing of women worldwide.
corporate,appointments,supporting women,product,diversity and inclusion,careers,representative,responsible business angela-cretu